Red alder (Alnus rubra) is the most common hardwood species in the Pacific Northwest.  For a long time, in fact, many people might have said that it was a little too common.  Having little monetary value, growing where nobody particularly wanted it, and often times out-competing more commercially viable species, red alder has had a long-standing reputation among tree farmers as an opportunity for chainsaw practice.

However, things have changed over the last few decades and alder wood can now be worth nearly as much as Douglas-fir.  Not to mention it can be managed on shorter rotations, adds nitrogen to the soil, and can tolerate wet sites where many other species grow poorly.  Coming from the Midwest, where alder only grows as a shrub, it has been very interesting to learn about the ecological and economic potential of alder for forest owners.  With this potential in mind, I thought it might be worthwhile to give a detailed profile of this tree and clear up some common misconceptions.

Red alder ranges in a long stretch along the Pacific coast from as far south as southern California to its northern extent in southeast Alaska.  Some patches of it can be found on north-facing slopes in northern Idaho and western Montana, but for the most part it enjoys low elevations west of the Cascade Mountains.  The best tree development occurs below 1500 feet in Oregon, Washington, and British Columbia (Harrington, 2006). 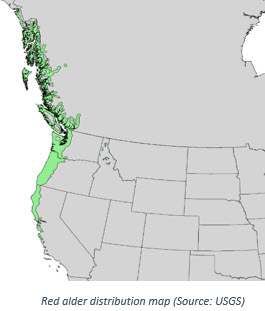 makes it what forest ecologists call a “pioneer species”.  In unmanaged settings, it requires bare soil to establish and plenty of light to grow, so it’s rarely seen growing underneath an existing canopy.  It’s a fast grower, and achieves the majority of its height growth in the first two decades after establishment.  Additionally, alder is part of unique group of plants known as “nitrogen-fixers” that create symbiotic relationships with soil bacteria to transform atmospheric nitrogen for the plants use.  This allows it to establish on sites with limited nitrogen, such as new or highly disturbed soils.  Over time as natural succession continues, alder often gives way to shade tolerant species like western hemlock, red cedar, and Sitka spruce.  Typically living less than 100 years, alder has a relatively short lifespan.  So compared to other pioneer species like Douglas fir, which can often live to be 600 years old or more, alder is the “live fast, die young” tree of Pacific Northwest forests.

It’s commonly known that red alder enjoys wetter soils.  Most forest owners can attest to this, as they’ve seen it take over their stream sides, ditches, and any other perennially moist sites.  While it’s true it is rarely found on drought-prone soils, it’s very important to recognize that it is also not a fan of overly wet, poorly drained soils like some species (i.e. ash, cottonwood).  For this reason, choosing a site where alder will grow into a valuable product can be difficult but is possibly the most important management step towards producing high quality logs.

A common phrase to hear among some foresters and tree farmers is that “anywhere Doug-fir will grow, alder will grow too”.  While there is truth to this, it’s not the entire story.  Just because alder will grow on a site, doesn’t mean it will grow well.  Table 1 shows some basic characteristics of a good alder site.

If you’re interested in the financial return of growing alder, the best prices come from trees with large-diameter boles and few lower branches.  Getting alder to grow this way requires planting densely.  The competition with nearby trees forces alder to grow upwards quickly rather than growing laterally and creating a thicket of branches.  Recommended planting density is between 540 – 680 trees per acre (or a spacing of 9’ x 9’ or 8’ x 8’), although some plant lower where natural regeneration is likely.  And while you don’t need bare soil to plant alder trees, you will likely have to control competing vegetation.  A critical metric for successful alder management is the first year of growth.  Alder can reach 50% of its maximum height within 15 years, with the fastest growth rates occurring in the first 5-7 years (Harrington, 2006).  So if your trees aren’t shooting up out of the ground something is wrong, and it’s likely your site.  This early growth is critical to get out from under other competing vegetation (i.e. Scotch broom), which can stunt growth and kill seedlings.

How you manage your alder after it is established is going to depend a little on your goals.  Are you in it for timber?  Are you interested in its wildlife benefits? Are you looking for smaller logs to fuel your mushroom growing operation?  Heck, maybe you’re just growing it just because you like the look of it.

Alder requires a live crown ratio (the proportion of the stem with living foliage) of about 50% to maintain vigorous growth, 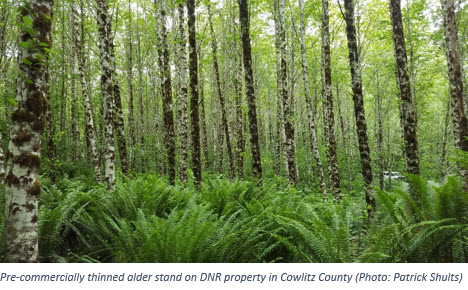 where trees like Douglas fir can get away with 40% or even 30% at times.  Since it grows so fast, alder crowns in a densely planted stand can get below 50% as early as 7-10 years, depending on the site quality.  This is where your management goals come in.  If you’re not cash-driven and want to take a more hands-off approach, thin heavily and leave it be.  You can remove about 70% of the stems (down to around 150 trees per acre).  This will keep you from having to do another thinning down the road and you will still produce a fair amount of volume at the time of final harvest.  If you want more volume, thin lighter to about 250 trees per acre (or about 50% of the stems).  This will give you a little more volume to play with for a final harvest and possibly a commercial thinning before then.  The basic gist here is to plant alder densely to minimize the retention of lower branches and thin hard to maintain crown ratios.  The main difference between managing alder and managing conifer species is that you have to do it earlier and more frequently, which requires actively monitoring your stands.  If you play your cards right, choose the right site, and don’t miss your thinning windows, you could have an alder harvest as early as 30 years on really productive ground.  A quick, but important, note: don’t leave valuable alder logs on the ground after cutting.  Alder decays quickly.  So if you’re going to harvest, make sure you have a plan to get them to the mill quickly.

This is a short, sweet, and fairly rosy summary of even-age alder management, so I encourage you to check out the sources at the end of this article to get more in-depth information on alder silviculture and potential pitfalls.  Additionally, I know it is likely that the majority of landowners reading this are not sitting on an empty plot waiting to be planted.  Instead many are dealing with existing, and likely decadent, stands of alder.  These stands are common throughout western Washington and are a result of intense logging without replanting in the mid-20th century.  Intervening at this point is complicated and depends largely on your goals as the landowner.  If you are purely cash-driven, it can often be the most efficient choice to simply cut down the decaying alder and start over.  Thinning in these older stands provides little benefit to tree growth since crown ratios are typically small and trees are reaching the end of their lifespan.  However, many landowners aren’t motivated by income and instead are driven by a love of wildlife, aesthetic appearance, or recreation and consequently may be interested in developing more complex forest systems.  Your options for management can range from light-intensity thinning of the alder overstory to underplanting shade-tolerant species, or even doing nothing at all.

However, it is important to note the risk of doing nothing.  On occasion, the dense shrub layer that often exists in pure alder stands can inhibit regeneration of shade-tolerant conifers below and leave you with a thicket of shrubs after the alder dies.  To learn more about options for existing alder stands, try the WSU publication Management Options for Declining Red Alder Forests (PDF) by Kevin Zobrist.

It is also important to note that because it can tolerate wet sites, many existing stands of alder may be in Riparian Management Zones (RMZs).  It goes without saying, but your management choices are much more limited in these areas.  However, some options, such as converting alder to longer-living conifers (AKA a “hardwood conversion”), allow for management in these areas.  Contact the Washington DNR Small Forest Landowner Office to learn more.

In the first half of 2018, the market value of red alder in the Washington coast market area has averaged around $720 per mbf (1,000 board feet).  Compare that to Doug fir, which has averaged about $745 this year. Clearly the market has changed since the 1990’s when alder was regularly worth less than $250/mbf.  And better yet, it’s showing no signs of slowing.  While the timber market is and always will be volatile and unpredictable in the long run, it seems that prices for quality alder saw logs are going to be competitive for the foreseeable future.

Alder is used for a variety of end products because of its wood characteristics and availability in the marketplace.  It has a reputation for being easy to machine, glue, and finish.  While it ranks low in durability and hardness, it is prized for its grain and appearance.  It’s often used for veneer, furniture, cabinets, paneling, doors, and food dishes.  Lower quality logs are often used in pulp products like tissue and paper.

Alder has many uses beyond traditional wood products.  Small diameter logs serve fantastically for mushroom growing material. The bark contains salicin, which is a chemical similar to aspirin that can be used to cure headaches and other
maladies. Native Americans often used alder for dyes, baskets, medicine, and even used the dried bark as soup 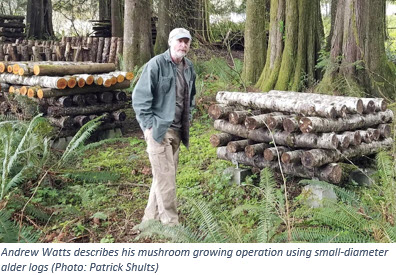 In terms of wildlife, birds welcome the fact that alder seeds stay on the tree throughout the fall and winter, when food is scarce.  Additionally, the dense shrub layers provide forage and habitat for a multitude of wildlife species.  Deer and elk also love the leaves, twigs, and buds (much to the frustration of tree farmers).

Alder is the best bet for a forest owner interested in hardwood management and its potential is remarkable both because of its vigorous early growth and ability to add nitrogen to the soil between conifer rotations.  If you’re a landowner and you’re hesitant to commit to growing alder, it’s understandable.  It has a long history.  And ultimately red alder is less forgiving than species like Douglas fir, so it may not be the right choice for an absentee landowner.  But many tree farmers have experienced planting conifers in an area, only to have them overtaken by naturally established, faster-growing alder.  In my mind, these are sites predestined for alder production and a great way for all types of forest owners to dip their toes in alder management (provided they are not in RMZs!).  After all, why fight it?  Now that it’s worth as much as other species, why not take advantage of what the site is doing already?

Get email alerts about new posts

Wildlife-Friendly Fuels Reduction in Dry Forests of the Pacific Northwest